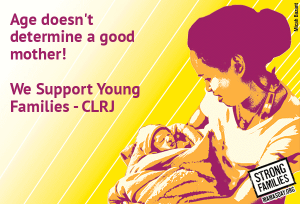 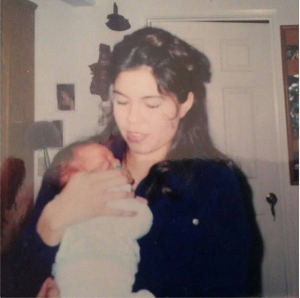 May is Teen Pregnancy Prevention Month, a particularly hard month for pregnant & parenting youth as they are subject to constant reminders of the ways in which their parenthood is a burden to society, the economy, and their communities. From the start, young parents are told that their pregnancy and/or child will substantially limit their chances at any success in life, which eats away at whatever self-assuredness they might posses. Parenting on it’s own is hard, but parenting while being bombarded with negative messaging is debilitating to our communities. Add to that the enormous pressure of saving face amidst widely publicized campaigns that proclaim being a young mother is incompatible with success and/or productivity. As a young parent you are left feeling isolated and unsupported.

Many years ago, my family threw me a baby shower. I was all of 16 years old. I was two months away from giving birth, and believe it or not, I was hopeful for what the future would bring. My mother, bless her heart, did everything she could to help me feel some sort of normalcy during my pregnancy. From preparing a make- shift nursery in a small corner of my bedroom, to providing me with substantial supplies of birthing books & maternity clothes, she tried her best to carry on as if my pregnancy was a joyful occurrence rather than the huge mistake everyone else thought I was making.

At my baby shower a little relative of mine came up to me and very sweetly wished me a happy birthday then asked how old I was. It took me a moment to realize that her mother had told her my baby shower was actually a birthday celebration. I remember suddenly feeling extremely self-conscious amidst all the gifts, streamers, and party favors. The happiness I’d been feeling shifted to shame.

As a pregnant teen, I quickly learned how to apologize for my condition. In the downcast gaze of my eyes every time a stranger would stare at my belly, and the way I’d nod my head in agreement anytime someone felt it necessary to tell me how difficult the future would be. But mostly, I apologized each time I swallowed the pride I felt at every pregnancy milestone- the first kicks, the ultrasound, the preparations for childbirth- and instead wrote detailed accounts of my excitement in the pages of a spiraled notebook rather than voice my feelings to those around me.

I’ve heard countless young mothers express grief over their inability to celebrate or even feel through their pregnancies. Silenced backaches, unable to express fears about the future, or to linger in the musing over the unknowns of labor for fear of having yet another person respond with a variation of the, “Well you made your bed…Now lie in it!” response that’s sure to come your way. As a result, the majority of us never heard words of encouragement or “congratulations.” Never mind the sense of pride we might have felt on our own while feeling our growing bodies, and thinking about the little people we were now housing. This might seem quite trivial in the bigger picture, but as a seasoned mother of four, (my last child born when I was 30 years), there is immeasurable value in being able to feel proud, supported and having others share in those feelings through your pregnancy.

I have often wondered where the value is in the dominant teen pregnancy prevention campaign shaming approach? Rather than focusing on pro-active strategies to prevent pregnancy, such as education and information about accessible family planning, teen pregnancy ad campaigns too often focus on the many ways a teen mother has ruined not only her life but also the life of her child.

Last May, seven young mothers- including myself- joined together to form #NoTeenShame in response to the stigmatizing ad campaigns that often dominate teen pregnancy prevention efforts. The #NoTeenShame members are located in cities across the nation. We are in different stages in our lives but have one thing in common: our experience as teen parents profoundly impacted us and inspired us all to become advocates for young parents. As young parents and young parent advocates we know first hand the importance of comprehensive sexual education. Rather than plastering billboards with images of young parents & the statistics that plague them, Comprehensive sex ed provides programs that address teen-specific concerns for ease of access coupled with multiple reassurances of confidentiality. In addition, the programs need to be culturally relevant, detail specific, and free of the condescending tone that is often present in sex ed programs.

As a former teen parent, I want young families to know that their journey in parenthood is worthy of validation and respect. I want to wish a happy Mama’s Day to all the youth who are parenting or expecting. I’d like to congratulate you for your resilience, your vision, and for the little ones who inspire you. I would like to invite you to share your stories with us, so that you give voice to your experiences and triumphs. On behalf of all the members at #NoTeenShame, I want to encourage you to walk with the knowledge that you are capable of accomplishing every goal you have for yourselves & your family. You deserve to continue on with pride.