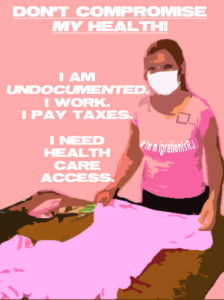 CLRJ is pleased to join our hermanas, the National Latina Institute for Reproductive Health (NLIRH), and the Colorado Organization for Latina Opportunity and Reproductive Rights (COLOR) for the 4th Annual Latina Week of Action for Reproductive Justice this week! In this critical moment when Congress and the nation are considering options to reform our inadequate and unethical immigration system, immigrant women’s needs continue to be left behind. We must raise our voices louder than ever to recognize and acknowledge the critical role immigrant women play in our nation’s social fabric and strongly affirm and protect the human rights of all people, particularly the 11 million undocumented Americans.

As part of the Latina Week of Action, CLRJ is proud to welcome guest blogger Jocelyn Cansino, a lead intern at CLRJ who gives her personal perspective on why immigration is a reproductive issue.

Since the election of President Obama in 2009, his administration has successfully deported 1.7 million undocumented immigrants. Just a year earlier during his 2008 election campaign, he promised the Latino and immigrant community that he would support immigration reform for millions of families who would be able to pursue their “American” dream. What exactly did immigration reform look like for Obama and his administration? Did it include the deportation of hard working parents, children, and the separation of families? What about undocumented women, men, and youth having to wait 15 years to have access to health care in the US? Today we are on the brink of immigration reform and seeing a world in which health care access becomes an even bigger burden to Latin@ and immigrant families.

The Comprehensive Immigration Reform (CIR) proposal that just passed the Senate, will provide authorized status and eventually citizenship to some of the 11 million undocumented immigrants in the US. Of course, they have to prove themselves “worthy” of citizenship first by meeting a long list of criteria and paying steep fees before they can even be considered eligible for the Registered Provisional Immigrant (RPI) or visa status . If you’re lucky and you’re eligible for the long wait to become a citizen in this country, that’s great (hey, better late than never), but what happens to the millions of undocumented people who are not eligible to become citizens? Under Obama Care, although you

continue to work in the US and pay your taxes (as numerous studies show), you are still not eligible to purchase health insurance even if you can afford to pay out of pocket for coverage. These laws continue to attack undocumented people by putting them in a limbo status, where their health is at stake. Out of fear of deportation, undocumented immigrants do not make their health their top priority and continue to be silenced through the interests, greed, and carelessness of the majority of elected representatives. If you found out you had a time sensitive diagnosis that 15 years couldn’t wait for, what would your options be? Thinking that all health care programs may deny you because of your status, you may become unmotivated to look further for any alternatives and jeopardize your own health and well being.

Comprehensive Immigration Reform (CIR) and lack of access to health coverage for undocumented people (even if they can afford it), are both attacks on immigrants, especially women’s reproductive health. Limiting their rights and access to these services is inhumane and demonstrates the privilege of whose lives are disposable. The realities that people will be facing are easily overlooked by many because of the so-called “benefits” it provides for millions. We are compromising the health of our community when we sit back and allow representatives to vote on this bill that will directly impact women and families on a day-to-day basis. We are settling for papeles that would provide security for some families but endanger and silence the rest. It puts our people at two polar opposites, splitting us into groups of “good” immigrants vs. “bad” immigrants. It is a strategy that is maintained by the oppressive structures of our system and constantly used to pit people against one another, distracting them from the real injustices perpetuated by our government and carried out through institutionalized violence. Without solidarity and resistance from the whole Latin@ and undocumented community, women and families will have to resort to risky alternatives to access health care.

Despite the potential of an immigration reform bill passing in D.C. this year, women and families will continue to struggle in this nation. The US welcomes the undocumented community to exploit their labor but when it comes to providing health care for our hard workers (along with many other social programs), we shut the door of opportunity. Latinas are the backbone of our families and communities, making them wait 15 years will force them into life endangering positions that could have been avoided to begin with. Undocumented women will risk everything when their last resort is to be smuggled into another country in order to access a health clinic or buying medication and abortion pills at a black market. Women bear the brunt of family separation and funneling them into deportation centers where they are sexually assaulted and shackled during labor are the real consequences if we do not pass a bill that is inclusive of all our folks. These are the positions some of our communities will face if they are forced to wait 15 years to have the same rights and access as their counterparts. History tells us that the oppression and marginalization of communities of color, especially undocumented people, will continue if we don’t pass a bill that has its roots in genuinely securing the dignity and rights of all. The attacks on undocumented women and families will continue even after CIR and this is why Immigration is a reproductive justice issue. Who wants a “Comprehensive” Immigration Reform when it sounds more like a compromised immigration reform? Let’s talk about REAL and JUST immigration reform.

*Follow the ongoing conversation on Twitter by using hashtag #ImmigrationisRJ and join us on August 8th @5:30 PM in East L.A. for our “Borders and Barriers: Health and Justice for Immigrant Women Now!” plática/ dialogue, RSVP here.*