One Year, Ten Months, and One Day! 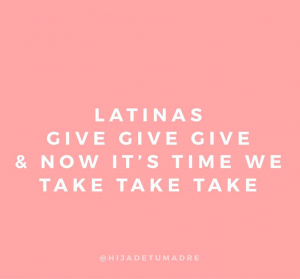 Yesterday was Latina Equal Pay Day. It marks the day when Latina pay in the United States roughly catches up to that of white, non-Latino men from the previous year. In other words, to make as much as white men did in 2017, it took Latinas an extra 10 months and 1 day! And according to the National Women’s Law Center, the California Latina wage gap is even more severe – on average we bring home just 44 cents for every dollar paid to white men – the largest wage gap in the nation. This means that for California Latinas, it takes us over a year to catch up to white men’s wages!

While the pay equity is impacted by a myriad of factors including occupational choices and time spent in the labor force, race, documentation status and gender based discrimination play a big role. Women of color and Indigenous women brunt larger inequities. If we dig even deeper into these numbers, we see that immigrant Latinas face an even larger wage gap than Latinas overall; we see that Latinas experience a wage gap at every education level and across all industries and occupations; we see that working mothers face a higher wage gap; and we see that the wage gap persists for Latinas of all ages, but Latinas nearing retirement age are hit especially hard.

Given that nearly two-thirds of Latinas (63%) between the ages of 16-64 participate in the labor force, this means that Latina workers collectively lose out on billions of dollars in wages every year. Latinas, like other women, provide most unpaid family caregiving, which often results in periods outside the paid workforce. Many Latinas also serve as the primary providers for their families, many of whom disportionately work in low-wage jobs with very little benefits or labor protections – further compounding income disparities. These disparities are at the core of what keeps many Latinas in poverty.

The wage gap not only undermines the economic security of Latinas and the families and communities they support, but also seriously threatens our health and reproductive autonomy. While it is imperative to push for policies meant to directly address income disparities such as increasing tax credits, ensuring living wages, ensuring that hourly workers can get the number of hours they need, updating and enforcing labor standards for all workers, bolstering work benefits, enforcing wage theft protections and other policies that combat wage and income disparities, we must simultaneously push for policies that address the health care needs of Latinas. Whether in the form of health care access, access to birth control, abortion, paid sick time, paid family leave, affordable housing, food security or affordable, high quality child care – expanding these types of policies will ensure that we are further addressing the economic security and overall well-being of Latinas. A radical cultural shift also needs to happen where recipients of social safety net programs are not stigmatized, vilified or stereotyped for seeking out the help we need from programs meant to help close the wage gap and lift ourselves out of poverty.

Ensuring that California is a place where economic security and health equity are a reality for all Latinas, our families and communities is not only just, but it is also a recognition that we are important assets to our state and its future.

About the Author: Ena Suseth Valladares is the Director of Research at California Latinas for Reproductive Justice.