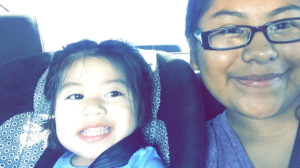 Before having my baby, the thought of having a child never existed in my mind. The whole idea of being a parent was the least of my worries. My life changed the day I found out I was pregnant. Although I do admit that finding out I was pregnant added worry, becoming a parent has also been a touching and heart-felt experience.

My beautiful daughter has given me so much inspiration. When she was born I transferred to a continuation school to be with my baby because I wanted to see her grow up. I had many struggles including often long walks in the rain and  in the hot sun, but I was able to finish the semester with straight A’s.
Unfortunately  I had to leave my continuation school the following year because they didn’t have the classes I needed to continue my education. I went back to regular school, although it  was hard leaving my daughter. Things were going well until they found out I was a teen parent.

I began to feel judged not only by my peers but especially some of my teachers. Even though I could not change everyone’s idea of a “teen parent” I’m glad I have been able to show a side of young parenting that is often hidden and change a the opinions of some.

Most recently I signed up to community college while attending high school to get ahead. I’m now ahead and ready to graduate next year. It hasn’t been easy, I do have a lot of help and I did go through many struggles, but just because I am a young parent it doesn’t mean I’m going to fail. It’s hard being a parent in general but we all are able to overcome obstacles. As young parents, we have to over come all the negativity that may come our way. We can always rise and continue to prove society wrong and succeed for ourselves and our children.